We Need Your Help to Save Leura Rifle Range !

In 2018 the Club was notified by Firearms Registry that we could no longer shoot centrefire because of their concerns with regard to the range template.  Bear in mind this template has operated for many years, has never been an issue previously and has caused no problems in the history of the range.   The Club is now involved in legal proceedings with the Registry in an effort to fight what we see as a gross overreach on their part.   As well as legal proceedings, the Club has also undertaken remediation work in an effort to show the Registry that the Club is prepared to work with them to resolve any issues.  Both are time consuming and expensive and have been a significant drain on the resources of the Club.

We need funding for the following:
‍
1.  To support legal efforts through the NCAT process, including any Appeals, to oppose unreasonable decisions made by the Firearms Registry that restrict our safe and reasonable target shooting operations.

2.  We also need to purchase a small machine to do earthworks to upgrade the range infrastructure, maximising the work being undertaken by Club members.
‍
3.  To help pay for any specialised labour to undertake maintenance and upgrade work to support the efforts of our volunteer Club workforce along with some materials.


The NCAT process is well underway and legal costs are already mounting for the Club.  We have worked solidly on maintenance and upgrade work over the past eighteen months to support the future operations of the Club but more needs to be done as a matter of urgency .  Our need for funding to support our efforts is immediate.

We are a small Club with a long history that provides a place for local people to meet, compete and share their enjoyment of our sport.   We are doing all in our power to keep the Club open but do need assistance if we are to be successful.  With your help we hope to keep the Club operational and part of this local community for another hundred years.
‍

The Katoomba Rifle Club is one of the oldest continuous sporting clubs in The Blue Mountains, established in 1893. Meeting each Saturday shooting several disciplines including Fullbore, F-Class, F/Open and F/TR. We shoot at distances ranging from 200 yards to 600 metres at the Leura Rifle Range, about 1km east of the main street in Leura.

Fullbore: This involves using a single shot target rifle in either .308 or .223 calibre with aperture sights. The ranges shot at Katoomba Range are between 200 yards and 600 metres and fullbore shooting involves using a coat and a sling and shooting in the prone position.

F-Class: F-Class involves using a front rest, a rear sandbag and telescopic sights. Like Fullbore, it is shot from the prone position. There are 3 categories in F-Class.

F-Standard; where the calibres used are either .308 or .223. There are limits to the projectile weights allowed.

F-Open; where any calibre up to 8mm is permitted.

For the most part this means that we can have a faster shooting session, without interruptions while waiting for marking. You don't need a high powered telescope to see the result of your shots.

Click on the example below to see what you see as the shooter. 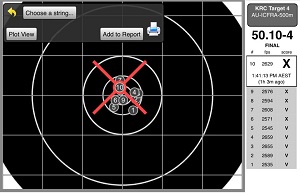 Some photos FROm our range